I’ve been a bit of a pen and notebook nut for a long time, trying out different fineliners, gel pens, pigment pens, ballpoint refills, and any notebook that looked interesting or promised a chance of better paper than the run of the mill. A couple of years ago, I got into fountain pens, because as much as I loved gel pens, it was too hard to find a good brown gel pen, and my brown felt-tip or fineliner pens seemed to lose saturation over time.

This led me to sites like Fountain Pen Network and various FP afficionados’ blogs full of pen, ink, and paper reviews, which in turn led me to Tomoe River paper and Nanami’s fantastic Seven Seas Crossfield (the versions with the cross grid, not full grid, and definitely not the microdot abomination).

The Crossfield has been on an indefinite hiatus for quite some time now, however, so I’ve been looking for alternatives. Elemental Paper ran a Kickstarter for notebooks with some other paper whose quality turned out to be hit or miss, and they’ve turned to Tomoe River for an alternative, packaged as the Iodine notebook with a beautiful purple hard cover. I decided to try it out for my next bullet journal notebook.

The paper is 68 gsm cream TR, so it’s thicker and yellower than the 52 gsm white that Nanami uses; and there are 272 pages so it has a decent page count without being too bulky, although the hard cover adds to the weight. The list price is $24 for the notebook plus $3 for domestic media mail shipping. I’ve used media mail before and know it can be a bit slow, so I was pleasantly surprised when the notebook arrived less than a week after I ordered it. It shipped from Hillsboro, Oregon.

The packaging was just a bubble mailer with no additional padding inside, and it looks like the mailer took a beating; the notebook itself is in a cardboard box/sleeve, which was banged up at the corners enough that the top of the notebook spine itself was dented, more noticeably on the inside back cover than on the outside.

With a thread bound notebook, I always open it up and try to break in the spine before using it. While doing this, I came across several pages that were dirty and/or had oddly located creases in them that seem unlikely to have been caused by USPS or anything I can think of after the notebook’s assembly, since they’re often in the middle of the page. This is really disappointing; an odd ding here or there is one thing, but there were quite a few, and I expect the pages of a brand-new notebook to be clean, at least. There were even pages near the back that were stuck together and tore when I separated them.

The dots are another disappointment. They are not incredibly dark, but they’re not especially light, either, and they’re huge by comparison to the Leuchtturm I’ve been using. They’re even a good bit larger than those on my Rhodia dotpad, which are about the largest that don’t look absolutely cheap and tacky to me.

The inclusion of two ribbons is nice, and being Tomoe River, I expect the paper itself to be a dream, but the large dots are a dealbreaker, and the construction flaws don’t help, so I’ll keep looking for a suitable Crossfield substitute.

Update: Here are some photos of the cover and edge – 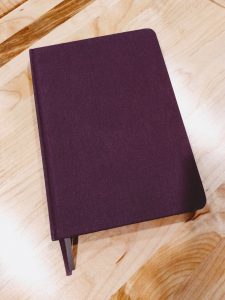 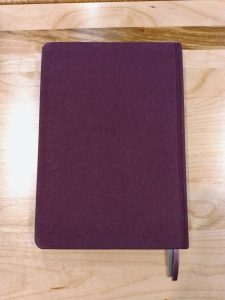 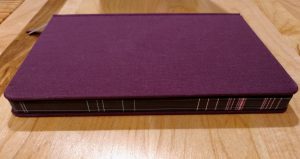 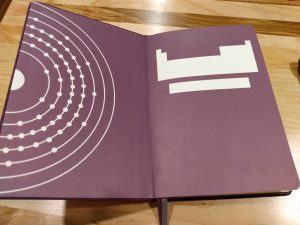 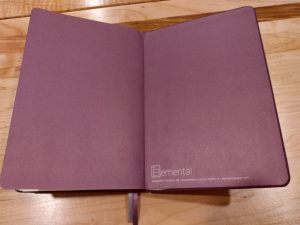